Home  »  Canada • Front Page  »  Even in a pandemic, TCS helps IT company tap into new markets

When the COVID‑19 pandemic forced businesses around the world to temporarily pause much of their operations and send staff to safely work from home, Unifai Solutions Inc. saw 70% of the projects in its sales cycle put on hold.

At the same time the lockdown offered enormous opportunity for the Kitchener, Ont., information technology company, which helps organizations like banks and insurance companies update their legacy systems and become more nimble in the digital era.

But how to sell its products and services in the midst of the coronavirus crisis? 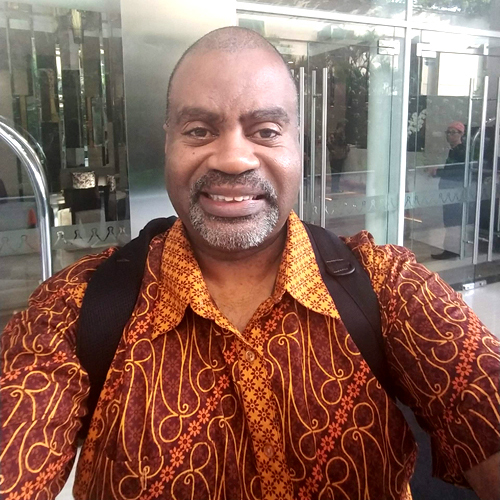 Rad Dockery, Unifai’s co‑owner and chief technology officer, sports a traditional batik shirt worn in business in Indonesia on a past trip there.

When the pandemic hit in March, the company had already been conducting lengthy negotiations—with the assistance of the Canadian Trade Commissioner Service (TCS)—to modernize the framework of PT Bank Mandiri, Indonesia’s largest bank. In a discussion in April with the bank’s CTO, Dockery pointed out that the project is vital to allowing customers to better use digital banking services.

“This is more critical than ever in a COVID‑19 world,” he stressed. “People need fast and secure access to their money. It hit the CTO hard.”

The pivot worked. In May, Unifai won a major contract with Mandiri that “will transform how it does business,” says Dockery, who credits the TCS for a large part of the company’s success.

“We view the TCS as a vital partner toward our growth,” he says.

When he co‑founded Unifai three years ago, Dockery got in touch with the TCS first in Singapore and then in Indonesia. Trade commissioner Paramita Nugraeni in Jakarta provided everything from cultural advice (he now wears a traditional batik shirt to meetings rather than a business suit) to tips on growing the business there. “Her insight and responsiveness gave valuable insights that we would not have obtained anywhere else,” he says.

Nugraeni, who covers the information and communications technology (ICT) sector as well as life sciences and consumer products, counselled Unifai and its local partner company, PT Anabatic Technologies, to develop a concise proposal for Mandiri. She also advised the company on its pricing and provided an introduction to the bank’s senior executive team.

Unifai’s new contract with Mandiri will likely lead to more deals in the country and region, Nugraeni says. “It now has a good example of its technology being used by one of the most prominent companies in Indonesia.”

This was a true team effort. Guy Bélanger, a trade commissioner in Singapore, provided useful details about how to engage partners and build relationships in the region. The TCS in Atlanta arranged for Dockery to speak at the FinTech South conference there in 2019, which helped the company build a business case for Mandiri and other potential clients. Unifai also received funds from CanExport SMEs, a TCS program, to support its international marketing efforts in Indonesia and Atlanta.

Today, Unifai has 15 full‑time staff and operations in eight countries. Dockery says three banks in Indonesia and another in Singapore recently contacted the company to discuss its solutions. It’s also heard from companies in Nigeria looking to upgrade their core technology to create robust remote work management systems, which is critical in the social‑distancing era of COVID‑19 and beyond, he says. “There’s a lot of potential new business on the table.”

The technology has practical applications for businesses, helping them to pivot and be more effective in the context of the pandemic, and brings better work‑life balance for employees, which has intrinsic societal implications.

The fact that this impressive technology is a Made‑in‑Canada solution is noted by potential customers, who trust the country’s capabilities, Dockery says. Mandiri in Indonesia tested Unifai’s solution with a load of 2,000 mobile banking transactions per second, amounting to 63 billion transactions a year, while the Interac Network in Canada completed just 371 million transactions in 2018, he points out.

As a Black Canadian, he’s proud of his company’s success internationally and at home. “Diversity and business can mix,” he says.

Dockery advises companies like his to contact the TCS in order to refine their pitches and value propositions, and says it’s critical to put together teams that have a good balance of knowledge and skills.

COVID‑19 presents challenges for Unifai, such as “not being able to hop on a plane and meet with someone,” says Dockery. “That’s where partners on the ground are so important and the TCS is critical,” he comments.

Trade Commissioner Nugraeni agrees that Canadian businesses need to be persistent in making connections, especially during this time of uncertainty. “My key advice as we move forward,” she says, “is to monitor the developments in the market and invest time in keeping in contact with potential customers.” And in this, the TCS can be a Canadian company’s most valuable partner.