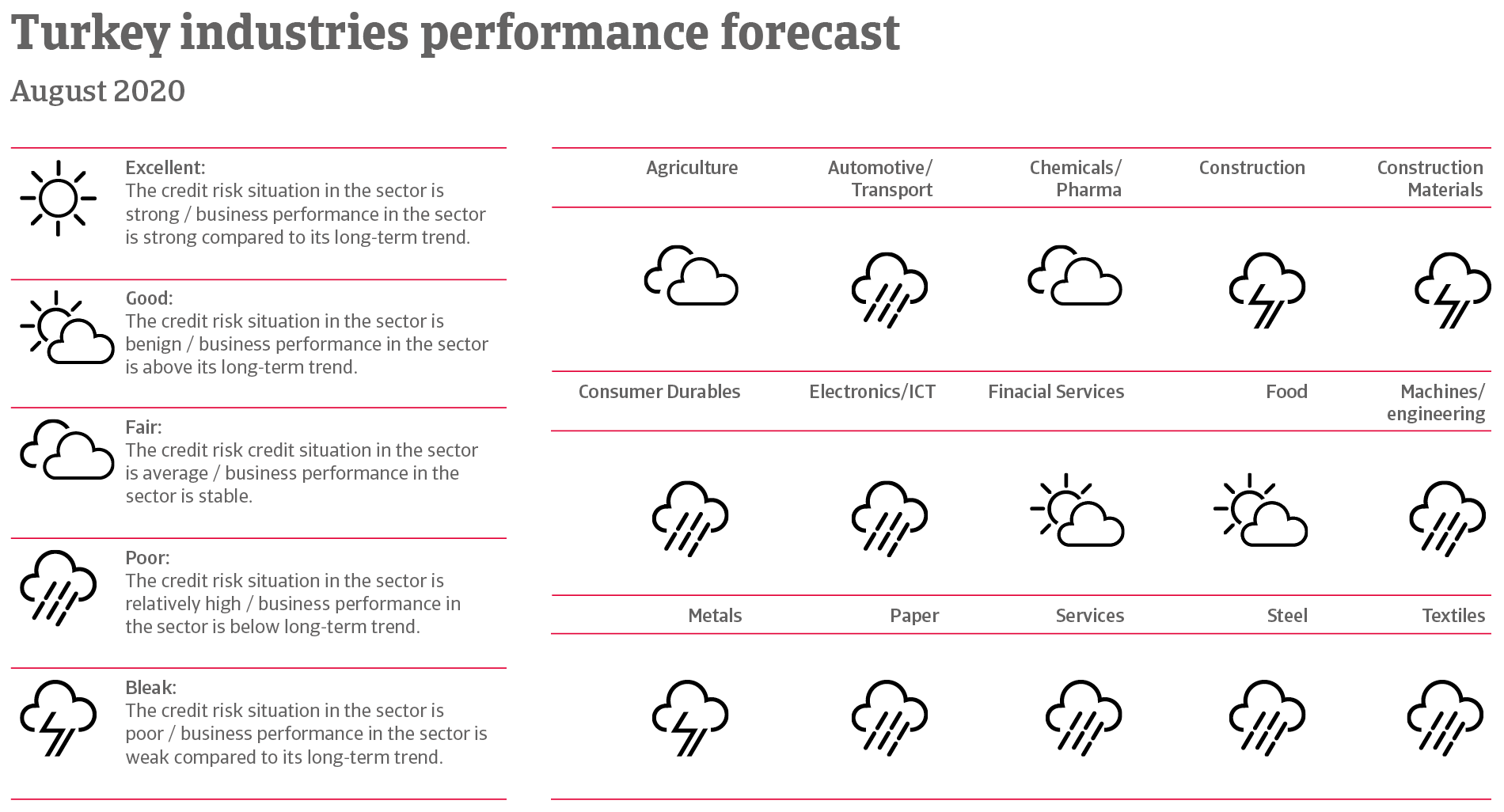 Relations with the EU and the US remain strained

President Erdogan won the June 2018 presidential elections in the first round, finally consolidating his power, as with this voting the transition to the new presidential system has been completed. In the June 2018 parliamentary elections the alliance of Erdogan´s AKP with the nationalist MHP party won 53.7% of the votes. In the March 2019 local elections the AKP was again the party with the highest percentage in the voting, but the oppositional CHP won mayoral elections in several large cities.

The south-eastern part of the country remains affected by the civil war in Syria and cross-border interventions by the Turkish army. Relations with Western partners (EU and US) remain strained. The most recent geopolitical issues are the Turkish intervention in the civil war in Libya and overlapping maritime claims in the Mediterranean Sea with Greece and the Republic of Cyprus.

In the aftermath of the currency crisis in 2018, Turkey´s economy grew just 0.9% in 2019. In early 2020 the economy started strongly with a recovery of credit growth, but the economic rebound has been abruptly halted by the coronavirus pandemic and subsequent lockdown measures, which have a severe impact on both domestic and external demand. GDP is forecast to contract 5.1% in 2020, as private consumption and investment will deteriorate (by 6% and by 2.4% respectively), and the tourism sector is hit hard. The downturn is exacerbated by weak external demand, with exports expected to contract by almost 14% this year, despite the massive lira depreciation.

The Turkish lira exchange rate already showed considerable volatility in 2018 and 2019. Besides worries about multiple geopolitical risks and foreign reserves being even lower than official figures indicate, doubts about the independence of the Central Bank were a major issue (the government has repeatedly voiced its view that high interest rates cause high inflation and has taken more control over the monetary policy). Serious doubts over the Central Bank´s independence have persisted since then.

The large capital outflow from emerging markets in Q1 of 2020 has led to a sharp depreciation of the lira, which had lost about 15% of its value against the USD until May 2020. As a consequence, the Central Bank has intervened to sustain the lira by selling more than USD 60 billion of its foreign currency reserves. At the same time, regulators have tightened limits on the amount of lira local banks can provide to foreign financial institutions. In order to bolster its foreign reserves, in May 2020, Turkey secured a tripling of its currency-swap agreement with Qatar, up to USD 15 billion. Additionally, Turkey has a currency-swap agreement with China.

Turkey relies on net inflows of capital from abroad to finance its current-account shortfall, but attracting sufficient inflows could prove problematic in the current environment. The low-savings economy remains very vulnerable to bouts of capital flight. Tourism revenues as a major source of foreign currency inflow (estimated USD 34.5 billion in 2019) sharply decreased in H1 of 2020, and a rebound in H2 is prone to a further spread of the coronavirus pandemic.

The Central Bank has lowered the benchmark interest rate to 8.25%, still below the inflation rate (forecast 10.9% in 2020). The aim is to stimulate the economy with cheaper and larger amounts of credit. However, as real interest rates continue to be negative, worries remain that further significant interest rate cuts could trigger another currency depreciation-high inflation loop.

In 2020 the budget deficit is expected to increase to 5.5% of GDP, as the government tries to stimulate the economy. The public debt level will increase to 40.5% of GDP (31% of GDP in 2019). While the public debt level remains low compared to international standards despite this increase, it is vulnerable to exchange rate, interest rate and refinancing risk, as nearly half of it is denominated in foreign currencies. Contingent liabilities have increased because of the credit guarantee program and increased lending via state banks, while issuance of new debt has become more expensive.

The level of external debt, which is mostly held by the private sector (banks and corporations), will increase to more than 200% of exports of goods and services in 2020. Turkish corporates, particularly in the energy, construction materials, steel, transport (airlines) and chemicals sectors have extensively borrowed in foreign currency from local banks. Some companies restructured their external debt and the debt service burden has decreased, but liabilities still remain high and sensitive to interest rate, rollover and exchange rate risks. Many businesses pay high interest rates for loans and are struggling with the impact of the weaker local currency value on foreign debt repayments.

Due to the subdued economic performance in 2019, the credit risk situation and business performance of some key industries already deteriorated last year, and this downward trend will accelerate in 2020 due to the deep recession, with both payment delays and insolvencies expected to increase sharply this year.

Business failures are expected to increase further in the construction and construction materials segment due to the economic slump. Companies in those segments already suffered in 2019 from overcapacity, high indebtedness and weak liquidity. The highly export-oriented automotive sector is severely impacted by sharply decreased production of cars and car parts, with many businesses facing liquidity strains and cash shortfalls. As a consequence of deteriorating demand from those key buyer sectors, the machines, metals and steel industries are heavily suffering, and a high insolvency level is expected in 2020.

The consumer durables industry is negatively impacted by lockdowns, lower consumer sentiment, currency depreciation and rising unemployment. The financial strength of many businesses has seriously deteriorated, and insolvencies are forecast to sharply increase in the non-food retail segment. The ICT sector is exposed to above-average credit risk due to increased import prices and deteriorating consumer demand. Overcapacity, a low equity base, decreasing domestic and export demand and competition from East Asia are causing liquidity bottlenecks for textile producers and retailers. The ratio of non-performing bank loans in this sector has increased to more than 8%.

Currently it is expected that the Turkish economy will strongly rebound in 2021, by 6.7%, based on sharp rebound of exports (up 14%) and domestic demand. However, should a quick recovery of the domestic and key export markets not materialise (e.g. due to a second coronavirus wave), Turkey would be highly vulnerable to global economic shocks, and could even suffer a comprehensive currency crisis.

Without comprehensive reform efforts beyond fixing short-term issues, the future earnings capacity of the Turkish economy remains constrained by macroeconomic imbalances related to high credit growth, high inflation and a large external deficit. This is coupled with structural issues related to its low savings rate and weaknesses in competitiveness, limiting FDI inflow. The investment climate is also hampered by a weak judicial system and an inflexible labour market. Moves to privatise state banks and the power sector are also proceeding too slowly. Without structural reforms to raise savings, reduce dependency on energy imports and improve the investment climate, Turkey´s potential growth rate will decrease to 3% – 3.5% per annum in the long-term – not enough to absorb the increase in the working age population of about one million people per year.