Steep recession stressing revenue and profits of businesses in many sectors 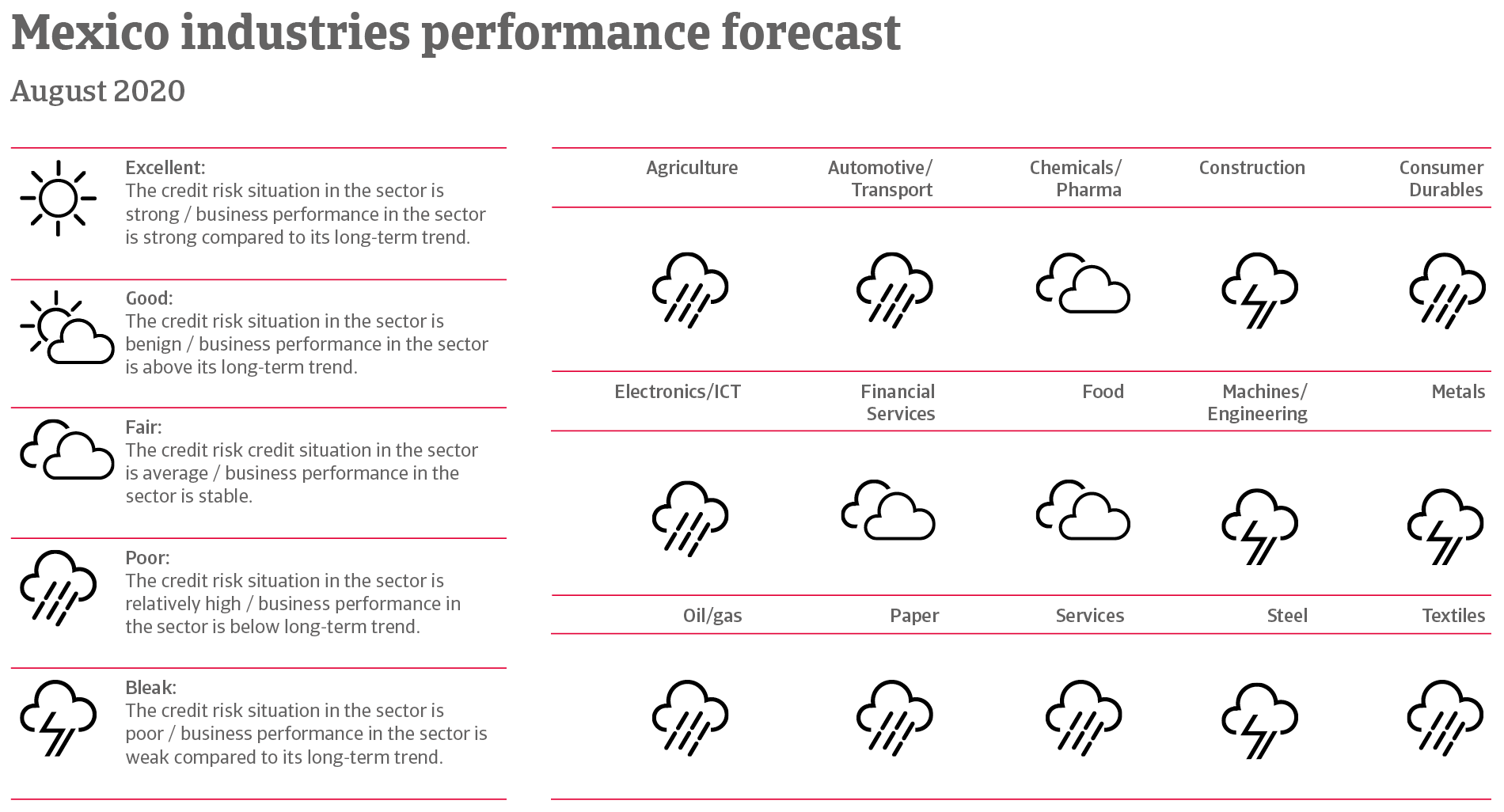 The government has eased lockdown measures early to restart the economy

Andrés Manuel López Obrador of the leftist Morena party governs with a strong political mandate, as a Morena-led coalition has a majority in both houses of Congress. Before the coronavirus outbreak, he had taken some popular measures, including raising the minimum wage, reducing government salaries (including his own) and creating a national guard to combat drug trafficking.

However, due to the severe spread of the coronavirus pandemic, the handling of the crisis by the government has increasingly drawn criticism. Despite the first confirmed case of coronavirus being registered in Mexico at the end of February, social distancing measures were not introduced until mid-March. Restrictions have been eased again since mid-May, as the government prioritized restarting the ailing economy despite the ongoing pandemic.

High crime rates and endemic corruption continue to undermine the business environment and state functions in Mexico. The economic repercussion of the coronavirus pandemic particularly hit workers in the informal sector, who amount to about 60% of the total labour force. As a consequence, rising poverty could become a social and political issue.

A steep recession is underway

Mexico´s economic performance is expected to deteriorate steeply this year, due to the severe economic contraction caused by the coronavirus pandemic. In Q2 of 2020 real GDP contracted 18.9% year-on-year and 17.3% quarter-on-quarter. The bulk of this contraction occurred in April, while figures indicate a slight recovery in June (when many states began lifting their restrictions). The level and intensity of the recession is still to be seen as the pandemic continues, which could trigger a return to comprehensive lockdowns. Any rebound in H2 will remain modest due to the persistently high infection rates. Currently a 7.2% GDP contraction is forecast in 2020, followed by a 4% rebound in 2021.

In 2020, private consumption and investment are expected to decrease 7.6% and 14.8% respectively, with only a modest increase in government consumption. A steep decrease in tourist arrivals and reduced remittances from the US amid the pandemic will heavily impact the economic performance.

While Mexico´s dependence on oil revenues has decreased over the past couple of years due to fiscal reform, it is still significant (6% of goods exports, 8% of GDP and 18% of government revenues). Public finances are not vulnerable to oil price declines, as the government has reportedly hedged its 2020 oil price at USD 49 per barrel. However, subdued demand for oil has a negative impact.

The automotive sector, Mexico’s leading source of exports, suffers from a sharp fall in external demand and severe supply-chain disruptions. Mexico´s exports of goods and services are forecast to contract by more than 9% in 2020. As the Mexican economy is closely synchronized with the US business cycle, it is heavily impacted by deteriorated demand from its northern neighbour. The US accounts for more than 75% of exports (more than 25% of Mexican GDP) and is the main source of remittances (about 2% of GDP).

The peso exchange rate against the USD sharply depreciated in March amid the deterioration of the oil price, but has regained some strength since May. Generally, the Mexican peso is vulnerable to shifts in market sentiment, but exchange rate fluctuations serve as a shock absorber for the economy, helped by the fact that Mexico´s foreign currency debt held by the public and private sector remains limited, and by exchange rate hedging. A healthy banking system and solid external balances underpin shock resistance for the time being.

Both government debt and external debt are sustainable, with the latter expected at 44% of GDP in 2020. The international liquidity position is adequate, with abundant official reserves (about six months of imports, abundant to cover 2020 external refinancing needs). Reserves are underpinned by a precautionary IMF Flexible Credit Line, which in November 2019 was extended for another two years (upon request of the Mexican authorities it was further reduced to USD 61 billion, down from USD 74 billion). The Flexible Credit Line reduces transfer and convertibility risks.

The Central Bank has lowered its benchmark interest rate several times in H1 of 2020, to 5.0% in June 2020 in order to support the economy. The government remains committed to fiscal discipline for the time being, and has launched a very limited USD 10 billion (1% of GDP) fiscal stimulus package, mainly targeted at the poorest households. In the absence of comprehensive government support some states and the private sector have stepped into the void. States have offered to suspend tax payments for businesses, and Mexico’s powerful business group, the Consejo Coordinador Empresarial, is providing loans to SMEs.

Many sectors and businesses under strain

Many companies are expected to struggle this year and investments will decline substantially, putting Mexico’s informal sector at risk. The pandemic has exacerbated financial conditions of businesses in the second quarter, negatively impacting Mexican SMEs in particular. The current economic downturn will aggravate the situation for many businesses in a wide range of industries, weakening the financial strength of many, and triggering an increase in payment delays and defaults in the coming months.

Due to the economic downturn and the pandemic, the credit risk situation and business performance of many key sectors has been downgraded to “poor” and even “bleak” (see chart on top). Many agriculture businesses are facing higher import costs of commodities (especially agrochemicals) due to the peso volatility against the USD, which negatively affects margins. Consumer durables and ICT retailers suffer heavily from deteriorating private consumption and decreasing financial strength. In the services sector many segments suffer heavily, especially hotels and catering, restaurants, bars, entertainment and cultural events, airports, tourism, travel agencies and tour operators.

The construction industry performed poorly in 2019, with a sharp increase in payment delays and credit insurance claims, and the economic downturn will aggravate the situation for many businesses. In the automotive industry, a decrease in production is expected in the medium-term, with fewer sales of personal and commercial vehicles both in Mexico and in the US. The machines, metals, and steel industries are negatively affected by higher import prices due to the peso depreciation, and deteriorated demand from key buyer sectors like automotive, construction and energy. The financial situation of businesses active in those industries is increasingly strained.

For more information, visit our friends at Atradius here: https://atradius.ca/reports/country-report-usmca-mexico-2020.html